William A. Fickling, Sr. started the tradition in 1949 when he noticed a beautiful volunteer tree in his yard, a Yoshino cherry tree.

In 1972, Carolyn Crayton, then Director of Keep Macon-Bibb Beautiful, spearheaded the planting of hundreds of these lovely trees in her Wesleyan Woods neighborhood.

Less than 10-years later in l982, the first International Cherry Blossom Festival was born. Since then, thousands of Yoshino Cherry trees are given away or sold during the festival and other events throughout the year.

What's Wrong With Our Cherry Trees? by: Gary Wilson

You may have noticed and even been concerned about the condition of our cherry trees from late summer until now.  Many have defoliated early as a result of above normal temperatures and lack of rain fall.  I have received many calls and emails over the course of the last two weeks regarding our unsightly cherries and wanted to shed some light on what I believe is happening.

My name is Gary Wilson.  I am a degreed Horticulturist from Auburn University.  I am basing my findings on my knowledge of trees, my study of insect and disease problems common to cherry trees and having worked in the field in Macon Georgia for the past 25 years.

I have heard a lot of rumblings about a shot hole disease that is attacking the cherry trees lately.  After making a field assessment of cherries around the area, I believe that to be true.  I don’t however, believe that is the primary culprit as to why the cherries have prematurely defoliated.  Cherry trees are short lived, high maintenance trees.  They require a lot of thinning and are susceptible to many different insects, especially borers.  Cherries will persist in the landscape for many years but tend to peak at around fifteen to twenty years old.

The past several springs have been wet ones.  We have had above average rain fall the past two springs.  This spring was unusually wet as well and rained almost the entire month of June.  I began to see a lot of shot hole fungus on many different trees and shrubs, not just cherries.  Hydrangea is susceptible to shot hole fungus.  When there is a pathogen present and the temperature is right, it only takes water to activate it.  The humid and wet conditions allowed rain to sit on the leaves of plants with little or no sunlight to dry them out.  The combination of all these things initiated the shot hole.

When the rain finally stopped it was like a faucet turned off.   We had little rain in August and none in September yet temperatures remained in the 90’s with high humidity.  This was very hard on the cherry trees. Trees and shrubs will protect themselves when they are stressed by shedding leaves, especially ones that have shot hole.  They are expending less energy by not carrying the leaves; but this inhibits the process of photosynthesis.

Thus the early defoliating of the cherries was more due to drought stress than a fungal problem, although fungus on the leaves did exist.  What I have observed however, are a variety of other problems affecting the cherries this summer/fall.  Many cherries are splitting and defoliating bark from southwest injury.  Southwest injury occurs in the early spring.  A cold winter will freeze the thin-barked trees and when the morning sun hits the bark it will cause the bark to split.   This will weaken the tree and allow borers and other insects harmful to cherries to take up residence.

Many of these trees haven’t been pruned or fertilized in years making them susceptible to disease and insect problems. Maintenance is what is at the heart of the issue.  Yearly pruning of vertical growth in the canopy of the tree will thin out the unnecessary branching that cherries produce.  It will also allow the roots to work more efficiently not having to support sucker branching.  Doing his makes the overall appearance of the tree healthier.  Putting down a good potassium based fertilizer in the fall or winter will give the roots reserves for the winter months and into the spring.  Be sure to pick up leaves that have dropped prematurely or otherwise so that the shot hole spores won’t overwinter, leading to a recurrence next year.

Spraying a broad-spectrum fungicide like chlorothalonil is also recommended after leaf drop.  This may be difficult to reach on many trees and may require the help of an arborist or tree service.  At bud break in the spring, it is recommended to go with a copper spray application to inoculate the emerging leaves.

As of now, with the early defoliation, we don’t know the extent of the damage shot hole has created.  We won’t know until the first blooms.  Be sure and remove any obviously dead branches when you see them as this won’t allow overwintering to occur. 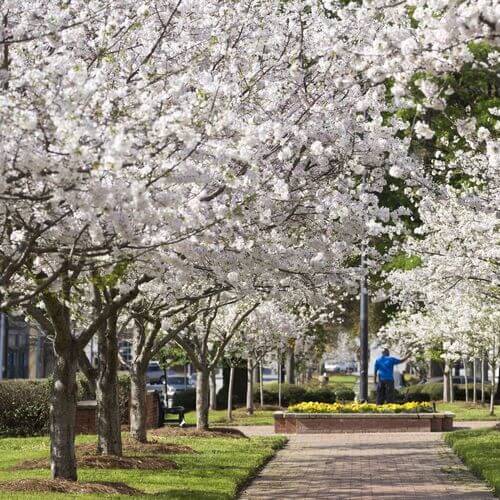 Caring for Your Cherry Trees After Planting